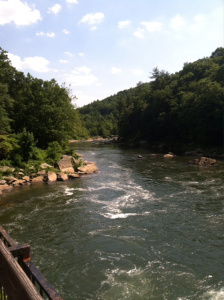 So there’s this “thing” out there called Teaser Tuesday. Basically, you post a small snippet of a work-in-progress (often still in draft stage). I’ve never done it before, but there’s a first time for everything, right?

So here’s a teaser from the short-story I’m currently writing in The Laurel Highlands Mysteries, series, A Brew to Die For.

It was a typical Friday night at The Copper Pot.

Trooper First Class Jim Duncan stood inside the door to his favorite bar. A crowd of people filled the eating area. The Pot was always hopping on a Friday, but especially on the first Friday of the month. That’s when owner Garrett Hopkins offered samples of locally-made wine and beer with a hot jazz soundtrack. While the trio played away in the corner, people milled about holding tiny cups of wine and beer. The heat, combined with the smell of bodies and booze, was enough to knock anyone out.

He squeezed through the crowd to get to the bar. Before he could say anything, Hopkins waved.

“Well I’ll be damned, Jim Duncan at the Pot on a Friday night.” Hopkins had to shout to be heard over the noise. “This is either a sign of the apocalypse or you’ve left law enforcement.”

Duncan grasped his friend’s hand. “Neither. Rare Friday off. I feel like I’ve won the freaking lottery.” He studied the crowd. “Nice turnout. Got anything special or should I stick with my usual?”

“Have I got a treat for a beer snob like you.” Hopkins flipped his towel over his shoulder and rummaged below the bar. He stood back up, grasping a dark, unmarked bottle. “You’re going to love this.”

Duncan watched as Hopkins poured the dark liquid into a glass. A thick, cream-colored head lay on the top of the beer. As he accepted the glass, the rich, smooth smell of hops, chocolate, and coffee assailed his nostrils. “Smells good. What is it?”

“Taste it first.” Hopkins leaned on the bar, clearly eager to hear Duncan’s assessment.
Duncan took a sip. The beer was strong and dark, but not overly bitter. Mellowed by a hint of chocolate, it slid smoothly down his throat. “Damn, that is good.” He studied the glass. “Good head, good texture and color. I can taste chocolate, coffee, and something else.” Taking another drink, he picked up the bottle, but it was unlabeled. “Okay, where the hell did you get this and where can I get a case?”

Hopkins slapped the bar. “I knew you’d like it. It’s a home brew from one of my part-timers, Damon Collingsworth. Kid’s going to St. Vincent’s for marketing, but his talent is in brewing.”

“So what’s the secret ingredient?”

“Little snot won’t tell me.” Hopkins’s smile belied his words. “He just calls it ‘something extra.’ He insists brewing is just a hobby. But I’m running my inaugural home brew competition tomorrow, and I’ve convinced him to enter.”

“Oh sure, on a day I’m working.” Duncan took another drink. In his experience, home brews were hit or miss but this one could have been produced professionally. “What’s the contest?”“Certified by the American Home Brewers Association.” Hopkins wiped the bar.

“First prize is five hundred dollars and I’ve got a representative from one of the local micro-breweries coming. Winner gets a chance for the recipe to make this guy’s catalog.”
“Nice prize.” Duncan was sure he was tasting a winner, if not overall then at least in a stout category. “Kid here tonight? I’d like to give him my compliments.”

“He’s around somewhere in this mess.” Hopkins waved a hand at the sea of bodies. “If I spot him, I’ll send him over. Enjoy, I’d better get back to work.”

Hopkins moved off, and Duncan returned to his beer. It had been a while since he had been able to make a jazz night at The Copper Pot. The sound of the music coupled with the beer had almost lulled him into complacency when he felt a tap on his shoulder. He turned, instantly alert.

Duncan’s palms grew sweaty and only partly from the heat of the crowd. “Every once in a while, I’m a good boy and they let me out to play. But what brings you to The Copper Pot? I didn’t think you were a bar scene kind of girl.”

Sally tucked a strand of her long, brown hair behind her ear. She’d let it down, and it curled around the shoulders peeking out of her cowled sweater. “I’m not, but my mom came down to visit,” she said. “Figured I’d bring her to a local event. Wine tasting is right up our alley.”

“They’ve got some good ones.” He forced himself not to stare at her ass, nicely covered in dark-wash denim. He clenched his left hand and rubbed the ringer finger, reminding himself that he’d decided not to ruin a perfectly good friendship.

“That’s what I hear.” Sally rocked back and forth, and fussed with her hair. “Mom, I’d like you to meet someone. This is Jim Duncan, he’s a friend of mine.”

The woman who stood next to Sally had brown hair sprinkled liberally with silver, but her green eyes were a match for her daughter’s, as was the bone structure in her face. “Always a pleasure to meet a friend of Sarah’s,” she said. “So, Mr. Duncan, what do you do and how did you meet my girl?”

“Mom, I told you not to call me that.” Sally’s cheeks turned pink. “You just met him, stop with the third-degree. Jim, this is my mom, Louise Castle.”

“It’s your name,” Louise said. “Why you insist on being called after a character in a comic strip I don’t know. And what’s so third-degree about asking a man’s profession and how he met you?”

Duncan hid a smile by taking another drink. Sally came by her spit-fire attitude honestly. “Pleasure is mine.” He set down his glass and shook Louise’s hand. “I’m a trooper with the Pennsylvania State Police. Sally and I met through a case investigation. Odd place to strike up a friendship, but we did.”

“A friendship, huh?” Louise’s eyebrow arched and she studied him.

“Oh my.” Louise leaned toward her daughter and tried to whisper, but her voice was clearly audible. “Is he gay? Do they let gay men into the state police?”

Duncan smothered his laughter in a cough. “The PSP is an equal-opportunity employer. But I’m not gay. It’s worse.” He leaned in and winked. “I’m divorced.”

Louise started to speak, but was cut off by a blood-curdling scream coming from the basement. Duncan’s relaxed attitude fell away in a split second, and he clapped his hand to his waist. Of course the Glock wasn’t there and it threw him for a second. Recovering, he hustled over to the source of the scream, politely, but firmly, pushing people out of his way.

“Miranda, calm down.” Hopkins patted the shoulder of a young girl in an apron, probably one of the Pot’s waitresses. “What’s in the basement that’s got you all riled up?”
Miranda gulped and tears spilled down her cheeks. “Mr. Hopkins, I just went down for more cups, for the tasting, and I saw him. Oh God, it’s awful.”

“What’s awful?” Duncan asked, assuming control of the situation. “State police.” He pulled his badge out of the pocket where he always kept it, even off duty. “What did you see?”
“It’s Damon, sir,” Miranda said. Her voice wavered, like someone torn between fear and shock. “I think he’s dead.”