So I survived my first Malice Domestic. On crutches, thanks to wonderful friends – old and new – and a gracious hotel staff. I even took some pictures. And all I can say is…

So where do I start? Well, my husband was gracious enough to drive me out to friend Annette Dashofy’s house early Thursday. And Annette was MORE than gracious enough to handle all the driving, down and back. Two things: Sheetz is awesome and Bethesda is crazy. The hotel was under construction, as were most of the surrounding streets (and if they weren’t under construction, they were one way), so God bless Annette for handling it all.

I fully intended to go to the Wicked Cozy Authors event at Barnes & Noble Thursday night. Instead I took a three-hour nap. So my Malice adventure started Friday. It was a lot of special events culminating in Opening Ceremonies Friday night. But I saw people I’d met previously, so that’s always nice.

The big deal about Friday? The anthology signing. Once again, I was blown away by two things. One, the line of people with the anthology in their hands, wanting my signature. Mine! Two, the names of the other people at that table. Award-winner Art Taylor. Charles Todd. Catriona McPherson. I will never, ever get tired of scribbling my name for smiling people and thanking them. I’m reading the anthology now and I truly hope everyone who picked up a copy is enjoying it as much as I am.

Got to a couple of panels Saturday morning – notably Dru Ann Love from Dru’s Book Musings and Kristopher Zgorski of BOLO Books. I even got a picture of Dru Ann with her Raven, which has been christened Koko.

I dragged myself out of bed to attend the Sisters in Crime breakfast, where Diane Vallere addressed the gathered members. I wish I had a quarter of her fashion skill. I parked myself next to the coffee service and a couple of new friends kindly offered to bring me a plate. Because, you know, crutches.

Sisters in Crime is celebrating its 30th anniversary this year, so we were treated to a gathering of past presidents. 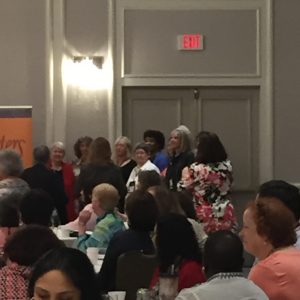 My panel – with fellow Mysterista Keenan Powell – was Saturday at eleven, and despite the fact that we were stacked against some bigger names, I thought it went pretty well.

I grabbed a quick lunch in the bar, then crashed in a chair downstairs with a cup of tea. Just a quick pick-me-up and rest my feet because I was monitoring a panel at two. Except…along came Dru Ann and Kristopher. We were joined by Robin Templeton. And we talked about writing, and books,, and Facebook. And suddenly I heard someone say, “It’s twenty after two.” Uh, what? Again, I’m am so sorry Lori Rader Day and I promise I’ll make it up to you in the future.

Saturday night was the banquet. And…oh, what fun. Okay, I heard the chicken wasn’t that great. I had the beef. But the dessert looked nice. And hey, they had me at chocolate mousse.

Friend and former Mysterista Cynthia Kuhn won the Agatha for Best First Novel for her book The Semester of Our Discontent. I really wish I’d had a camera ready to capture Cynthia’s expression. The loudest “whoop” went up at the announcement and Cynthia’s face made a perfect “O.”

I sat with Art Taylor, who won the Agatha for Best Short Story for his fantastic story “Parallel Play.” Very well deserved. I also met his charming wife Tara Laskowski. And this wonderful woman, Janet, on my right. We spent a good amount of time talking short fiction. Eventually I said, “I’m sorry, I didn’t catch your last name.” It was Janet Hutchings of Ellery Queen Mystery Magazine. After the awards, she left and said, “I’ll be looking for your story.” Gulp.

After, I met up with Annette who introduced me to an agent, who shall remain nameless (but she has my manuscript). We chatted for a good ten, maybe fifteen minutes. She showed me her inbox and explained why it was perfectly okay for me to send a weekly email to her. “I give you permission. And I don’t say that to everyone.”

Annette and I left before lunch on Sunday, so we missed the closing Agatha tea. Bummer, but we had a long drive (where I’m sad to say I fell asleep for a bit despite being determined not to do so) and we were borderline exhausted. And once we arrived at Annette’s her cat, Kensi, insisted I pet her. Sorry I had to cut it short, Kensi, but my husband is allergic and I had to wash my hands!

Like all conferences, it was a whirlwind event. Not enough time to talk to all the people I wanted to see. Isn’t it always. I’m very glad I went, though.

But I was also very glad to sleep in my own bed.