So, it’s been a while since I posted. A looong while. And for that I apologize, but life has been, well, life. I hope you’ll forgive me, because I have some news.

Here is the cover for Fire Storm: Hero’s Sword Vol. 5. 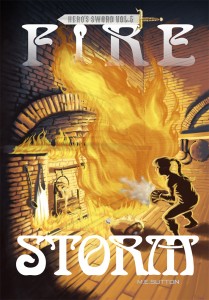 And I have more news.

The ebook is now available at Amazon, Barnes & Noble and Kobo!

I had to make some tweaks to the print version, so that should be available from CreateSpace within a day or two, and out at Amazon by the end of the week. iBooks is lagging, as usual, but hopefully they will also catch up this week.

Running for student council president seemed like a good idea at the time, but the campaign strategy sessions with Kara have Jaycee realizing just how much work is involved. Then there’s the strain it’s putting on Jaycee’s friendship with Stu, who is not exactly being supportive.

Escaping to Mallory is no escape from drama. Upon arrival, Lyla meets Rowenna Blacking, young nobility fleeing the neighboring estate of Trevayne amid accusations of theft and arson. Rowenna insists she’s been framed by her own brother in a bid for estate rule.

When a similar fire breaks out at Mallory Manor it adds more urgency to the situation. Joining forces with Galen, her male counterpart from Trevayne, Lyla must find solid evidence as to whether Rowenna is guilty or innocent–or if the answer lies somewhere in between.

If you’ve been following along with the adventure, I hope you enjoy this new installment. If you haven’t remember – there’s a digital boxed set that can help you get caught up (at least on books 1-3).

And, as always, if you like any of the books (or anything I write, for that matter), please leave a review at Goodreads or your retailer of choice. Even a few lines or a rating is appreciated more than you know.