It all started with a short story.

Well, that’s not exactly accurate. But to get to the beginning, we have to jump in the Way Back machine and rewind to October 2015.

A year ago, I attended Bouchercon 2015 in Raleigh, North Carolina. Despite some travel snafus (one, who knew construction would make it take three hours to get from my house to the airport and two, curse you American Airlines!) I had a really good time. Partly (okay, mostly) this was because I was there with a bunch of good friends from my chapter of Sisters in Crime – Annette Dashofy, Martha Reed, Susan Thibadeux, and Rebecca Drake. It’s hard to be too unhappy at a potential airport evacuation when you are laughing at Martha trying to preserve her pedicure in those floppy sandals.

After I returned, and as soon as I was able to, I made room reservations in New Orleans for Bouchercon 2016. I had no idea if I’d be able to go. The Raleigh trip had not been cheap; I could only imagine what New Orleans would be like. But…New Orleans. When would I do this again? So I made my room reservations and crossed my fingers. To anyone who asked if I was going, the answer was “We’ll see what happens.” My hopes were sinking fast–yet I held onto my reservation “just in case.”

After Bouchercon 2015, Martha and Susan said they noticed that a lot of the short stories that got nominated for awards were in anthologies–Bouchercon, Malice, the Guppies, you name it. So they issued a short story challenge for 2016. To submit as many short stories as possible, paying particular attention to anthologies. 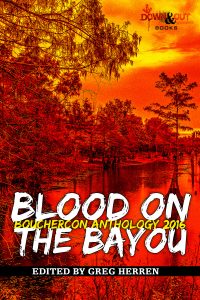 First up was Bouchercon 2016, Blood on the Bayou. I pondered, got the germ of a story, wrote it. Got some information from Ramona DeFelice Long, herself a bayou native, and rewrote it. Polished some more. Then at the end of March I sent it off. I thought no more of it. I wasn’t going to get selected. I knew the caliber of authors who made it into these anthologies. I wasn’t in that league yet. But maybe I’d get some feedback. I was proud of myself for pushing Send and that was enough.

Fast-forward to Mothers’ Day. After going to see Captain America: Civil War I decided to check my phone on the way home. You know, in case the world had come to an end or I had, like, gotten feedback from an agent in my querying journey.

Email from the Blood on the Bayou editor. My story was in.

I think I squeaked.

Anyway, this prompted the hubby to ask what this meant. Well, I’d be in the anthology. There’d be a signing with all the anthology authors who could make it, maybe a panel, I wasn’t sure. Long pause. Then he said, “Well, you were thinking of going to the Laurel Highlands for a weekend for our 20th wedding anniversary. How about I take you to New Orleans?”

Um, yes please. I knew I’d held onto that reservation for a reason!

With every month, the journey has gotten more real. First the contract. The editing phase. The cover release. The pre-order links. Holy moley, I’m going to be in a Bouchercon anthology! 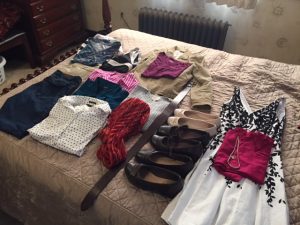 And here I am. A few days from zipping up my suitcase and hopping a flight with my hubby to New Orleans. Annette is on my flight down. I’m making lists of places I must go (#1, Cafe du Monde, even if I’m not a coffee drinker). I’m trying to balance conference attendance and volunteer work with husband time (come on, the man took me to NEW ORLEANS for our wedding anniversary – he deserves some time). Deciding what pen I want to use for the signing (hot pink, turquoise, blue or purple?). Taking in the fact that I am once again going to Bouchercon.

This time legitimately as a published author.