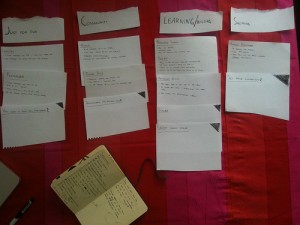 I need to say this up front: I love my critique group. These folks have made my writing so much better and I don’t find it a coincidence I started having success with short stories a few months after joining their group.

A couple months ago–end of summer?–I finished off a book. All good. I felt it was pretty tight, it could use an editor, but it was solid. I received a request for the full manuscript, so there’s that.

Then it was time to start a new project. Because what do you do while you’re waiting? You write a new book.

This would be the first time I was both writing the book AND getting critique. It meant writing fifty or one hundred pages at a time, submitting my monthly pages, getting feedback, making changes, then pushing forward. I was fearful, but hey, I trusted these gals and guy with my work. It Would All Be Good.

Fast forward to November. It was not good. It was the exact opposite of good. No fault of my critique group’s. But the story was a hot mess, and getting messier and hotter by the minute.

As I stared at my computer screen, letting comments wash over me–and yes, trying not to cry–it hit me. I was opening the door too soon.

Stephen King (at least I think it was King) says, “Write with the door closed. Edit with it open.” I thought that was what I was doing and to a certain extent I was. Except the story wasn’t finished. I had zero idea (or very little idea) where it was going. I didn’t even know who my killer was for goodness sake. My one partner asked if I had an outline.

“Yes,” I said. “It’s changed based on some things you said, changed again, and changed a third time.” Except I’ve found on any number of occasions that I don’t work well from an outline. Not when I’m writing that messy Draft Zero. I have to find my story, or more accurately let it find me. Then after I have that gloriously messy pile of words, I can construct an outline, and start cutting and adding to bring the story to the front.

In other words, I reverse-outline.

My problem was I didn’t have the story. I had a jumbled pile of letters. I was trying to write and polish, then write more adjusting for what I’d finished with the previous month.

I didn’t do NaNoWriMo this year and in hindsight it was a mistake. I should have taken the time to pour out that messy Draft Zero, find my story, and do the first pass of revision, THEN send it to my critique group. That’s what works for me. It’s the way I roll.

Believe me, this made me feel loads better. I pushed the pause button. Who said November is the only month you can write a novel? I’ve set aside December for writing Draft Zero, for finding my story. Once I’ve done that, I can do a first polish THEN open the door to my group. And they’ll be awesome, just like they’ve always been.

Is this a slower way to write a book? Maybe. Does it seem counter-intutive? Perhaps to some, but this is my process. This is what works. Once again, the writing universe has hammered that point home.

You know what they say. If it ain’t broke…